Every Machine starts with a header that describes the Machine:

Concepts of a Machine:

A pipeline is a sequence of filters and Transforms. Let's look at the following example:

From the example above we can quickly see that ‘//’ is used to comment code. You will also see that each Machine has a unique name, display name, and description. These are used to describe the Machine and translate it to show as follows: 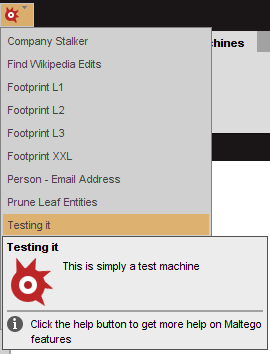 In the example, there are three Transforms that are executed – top to bottom. The first one takes a domain name as input and generates an MX record. At that stage in the pipeline, we have an MX record, so the next Transform takes the MX record to an IP address which in turn is Transformed into a netblock. The resultant graph looks like this (we used ‘paterva.com’ as input): 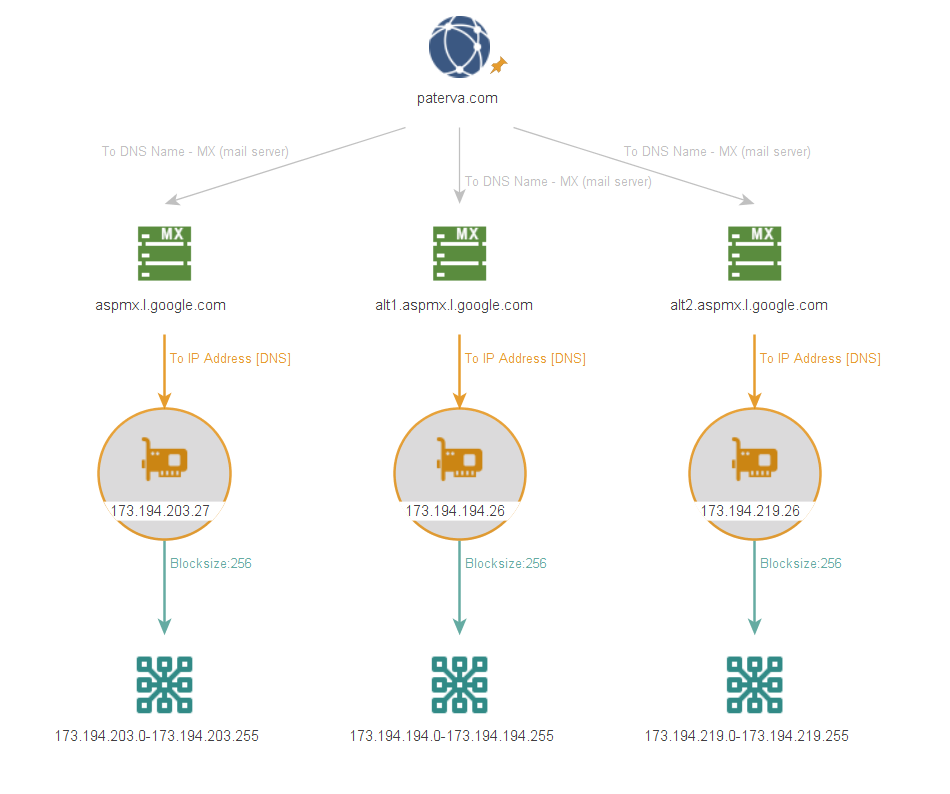 The pipeline looks like this (always left to right):

It’s important to know that the pipeline does not accumulate Entity types. It only contains what the previous step has generated. This is also true for filters which we’ll get to later.

To run Transforms in parallel we’ll use the ‘paths’. Again, let’s look at an example:

The resultant graph (running on ‘facebook.com’) looks like this: 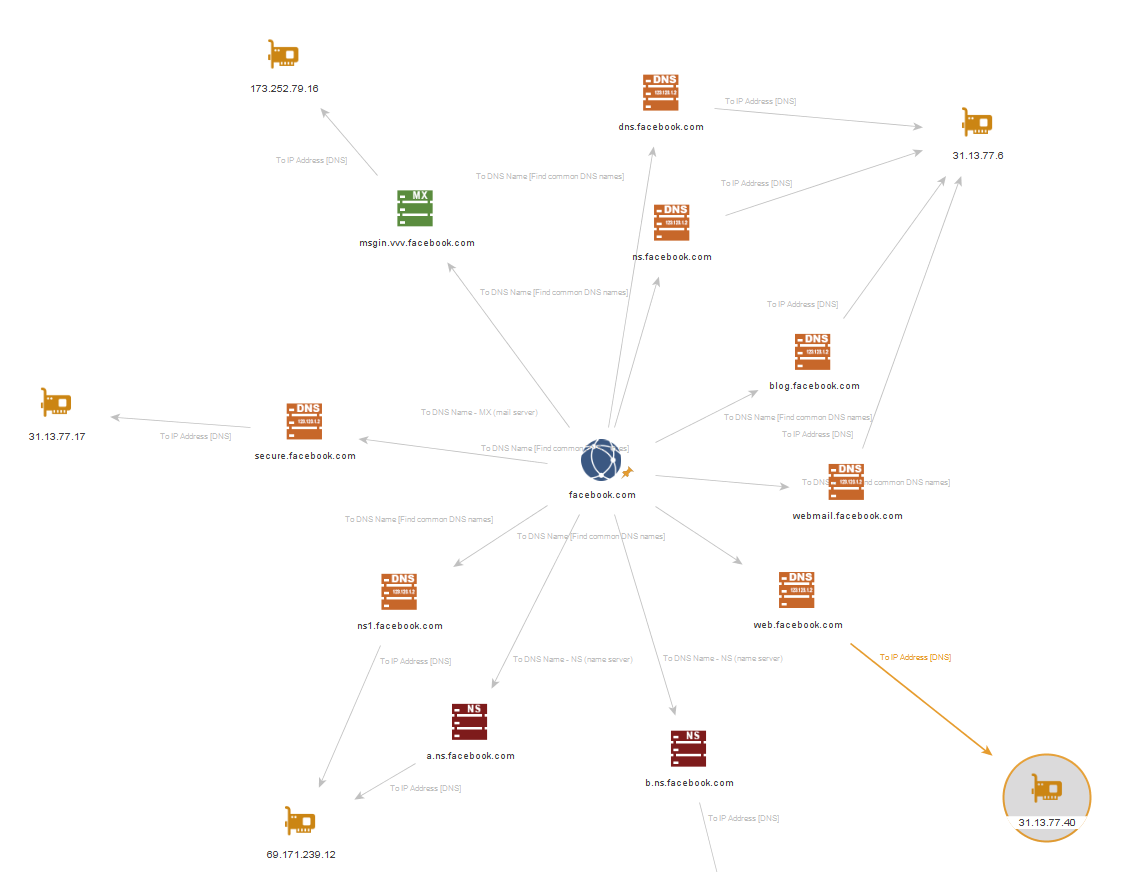 Note that there are MX, NS, and DNS Name records on the graph.

It’s important to note this because the MX record Entity and the NS record Entity inherit from the DNSName Entity - all of these can be resolved to an IP with one Transform.

Whenever you want to split a pipe into two or more sections the syntax is as follows:

Commands inside the curly brackets will be executed in parallel.

Let's take a look at how to handle this when trying to achieve something like this:

The problem here is that there is a sequence of Transforms that are within their own pipeline but which have to be executed in parallel. In Maltego scripting language this can be achieved as follows:

From this example, you can clearly see that each ‘sub pipeline’ is in a ‘path’ clause, but that these run in parallel.

The resultant graph when running on ‘logica.com’ looks like this: 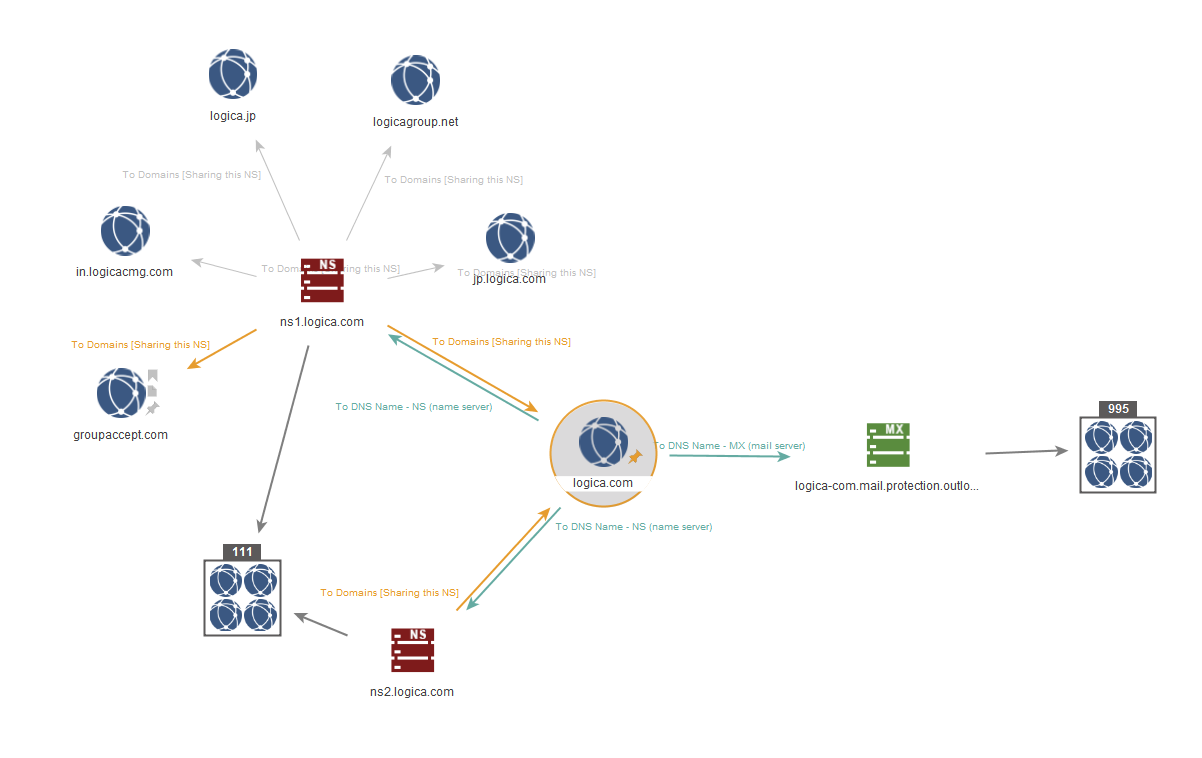 From this graph, it becomes apparent that some form of user filtering is needed before we proceed with the next steps. In this example, the NS records ns1.logica.com and ns2.logica.com yield good info, but Logica also uses Outlook as an MX, and looking at shared domains is not particularly useful. We cover filters in subsequent sections – keep reading!

Transforms can optionally be passed extra information. Slider value (how many results to return), as well as Transform settings, can be specified:

Let’s look at an example:

Transform settings can be specified as follows:

The setting’s actual name (e.g. not the display name) can be found in the Transform Manager:

There are two types of filters – user filters and pipeline filters. A user filter will give the user the chance to interact with the information in the pipe, effectively stopping the flow until the user has decided what to keep in the pipe and what to delete. A pipeline filter (or just filter) will filter the information based on certain parameters and requires no user interaction.
To stop the flow and send the output to the user for manual filtering, simple insert the command ‘userFilter()’. Let’s use it in an example. We’ll use the same pipeline as before, but this time give the user the option of editing the MX and NS records before passing them along to the sharedMX/NS Transforms. The script thus looks like this:

When running this inside of Maltego it looks as follows: 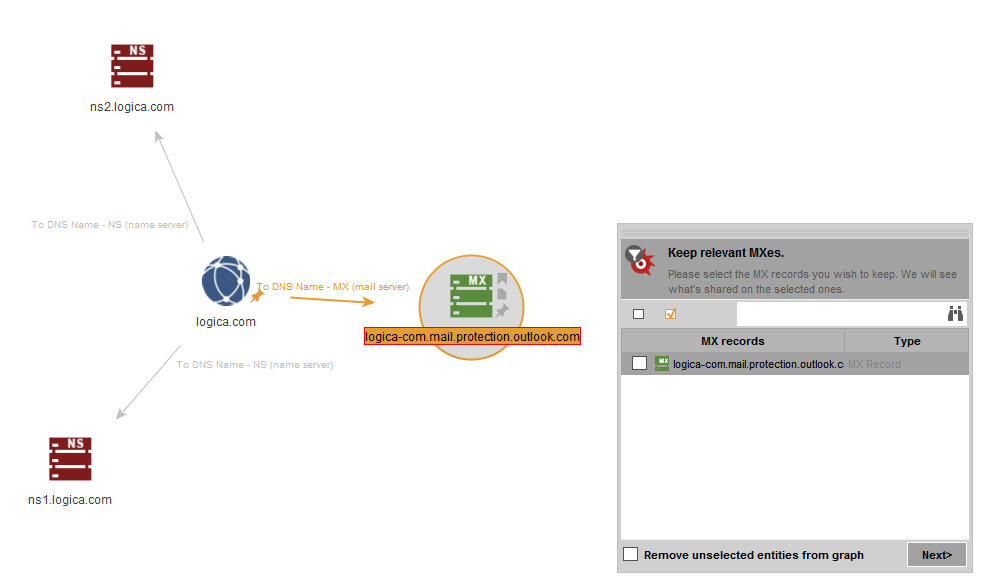 In this case, we’re telling Maltego that we should not pass the logica-com.mail.protection.outlook.com Entity onto the next Transform. Once this user filter has been completed (the user clicked on Next), the pipeline flows again.

The following options are available: 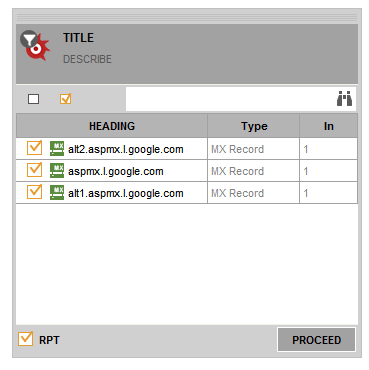 The user filter for above is as follows:

Pipeline filters stack next to each other. Each line in a filter makes the filter more specific. Consider the following script:

Note that the named Entity recognition(NER) Transform will return three types of entities – Person, Location, and Phrase (which is the organization/company). To get the proper name for the Entity you can look in the detail view:

When we feed this Transform the BlackHat Europe 2010 speaker lineup (http://www.blackhat.com/html/bh-eu-10/bh-eu-10-speakerbios.html) the result is as follows: 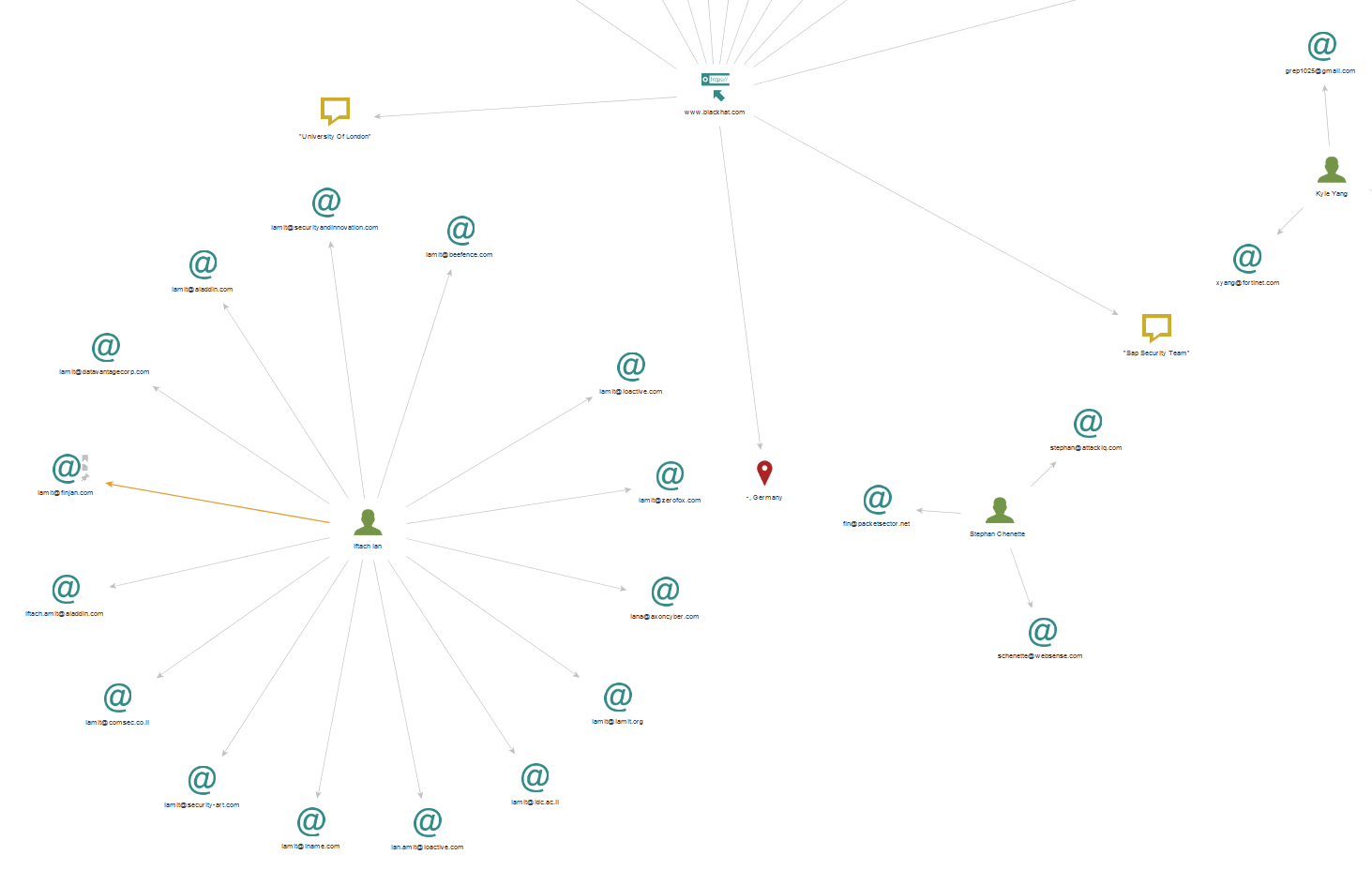 If we needed to do something with the other types in the pipe (e.g. the phrases) the pipeline should look like this:

The code for this looks as follows:

The following can be used to filter in pipelines:

When working with strings – for instance in value or property value filter the following applies:

When working with numbers – for incoming, outgoing, age etc. the following applies:

In many cases, you want to collect nodes from all over the graph and not just from the current location in the pipeline. To do this you can add the argument ‘scope:"global"’ to filter any Entity on the graph. Consider the following script:

When you run this Machine on any node this script will simply prune leaf nodes on a graph. Leaf nodes have no outgoing links and just one incoming link – which is precisely what the filter combination does. Another way of writing the filter would be:

Here we are simply reversing the order of the filters but it ends up being the same thing.

Keep in mind that adding the global scope to your filter will access the ENTIRE graph everything. Therefore the second call will basically remove the first filter - this would be wrong…

…as the second filter line also contains the global scope and negates the first filter.

The following sections explain the actions that Machines can perform.

You can instruct Maltego to delete nodes. This is very useful when using perpetual Machines (otherwise the graph grows out of control over time). In certain scenarios, you would want to be able to delete not just the node but perhaps the parents (and/or) children of the node too. The delete command will always delete the node it’s running on. The command to delete nodes is … delete().

Options for the graph layout types are:

To help debugging Machines you can use the ‘log’ command. Whenever you call this command the Maltego GUI will tell you what’s in the pipe at that stage. Consider the following script:

Inside of Maltego, you’ll see the following in the output screen: 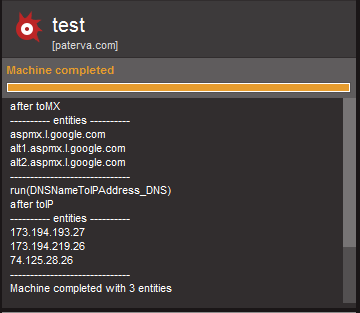 When called with showEntities:false the command acts as a scrolling status update in the text window.

To set the status at the top you may use the status command. This sets the top label on the Machine window. Keep in mind that when setting the status label in a parallel path only one of the label will be visible – as the commands are executed in parallel and whatever last label is set will stick. Here is an example of the status command and the corresponding output: 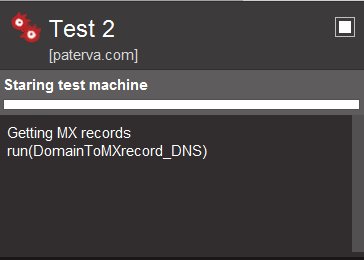 You can easily save a graph as the native Maltego format (MTGL at the time of writing) or export it as an image (PNG). The following actions are available:

It is possible to have Machines that run until terminated. Think of this more as a monitoring Machine. Use onTimer(X) {} instead of start{} in your script. This will start the Machine every X seconds. Consider the following script:

As you can see from the Machine – running the Transforms are fairly straightforward. The more interesting code is deciding when and which nodes to delete to ensure that the graph is always up to date. When a Machine is still running it will not start another instance of the same Machine.

To automate the process of running Machines, you can start Maltego with a new Machine running with the following command:

The options listed below are also available: